You are coming from a location for which we have a specific website. Please choose one of the following:

This site uses cookies. By continuing to browse the site you are agreeing to our use of cookies. Find out more here. Hide

back to News
TOP OF PAGE

ad notam and the Magic Mirror 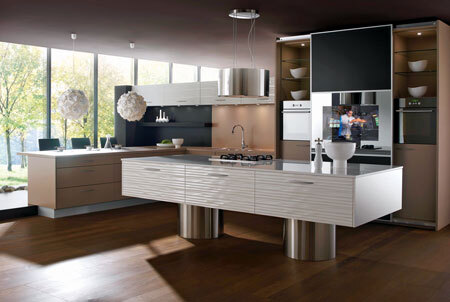 Although the articles about the products are not among my favorites, I want to make an exception for a product with a high content of specific know-how and which I often and willingly use in my work as a consultant and designer for special systems. We will speak about the German company ad notam and its products, world leaders in the niche of “mirror TVs” for applications which require large aesthetic impact, functionality and reliability

WORKING IN A MARKET OF ARCHITECTS AND INTERIOR DESIGNERS MEANS HAVING TO DEAL, ON A DAILY BASIS, WITH REQUESTS AND APPLICATIONS WHICH ARE MADE TO SUIT THE EXACT NEEDS OF CUSTOMERS

If we stop and rationally think about a “mirror TV”, we are not particularly troubled by the solution in itself, because we are not talking about a specific revolution or about something which has never been seen before. However, when we examine it in detail, we understand

why a company like Ad Notam has become world leader for this type of solution; set up in Germany on the borders with Switzerland almost 10 years ago, what characterises the dynamic company we are talking about is not just the quality of the materials and the
workmanship, but also the number of exclusive patents of these applications which make it unique in the international panorama.

Aesthetics and finishes first and foremost

Working in a market of architects and interior designers means having to deal, on a daily basis, with requests and applications which are made to suit the exact needs of customers. In this specific sector Ad Notam has created a niche of reliability, performances and respectability. The aesthetic variants of shape, rounding of the edges, sanding of the mirrors, insertion of LEDs manageable by the same remote control or serigraphed logos and imagines, support frames, fastening systems and any other minimum detail is totally achievable and producible. Let us imagine to have to make holes to pass some light fittings, or to have to complete a wall
in which only one element is a Mirror TV but it is important that the others also have the same finish and colouring; there are many examples, going from the insertion of a film to make the surface touch to the type of wall fastening (magnet, brackets, counter frames). This kind of solutions are integrated in bathrooms, but also in furniture doors, in glass walls of which a part
must become video (also a video wall when needed), in office dividing units where you want to integrate the video conference. Imagination and the distinctive trait of the application are the only limits, given that it is now technically possible to achieve everything.

The line is divided into three distinct groups, each having its own features:

The first, though it represents the entry level of the company, is already considered an excellent starting point. With the clear silver mirror it is the one most suited to bathrooms or to applications where the monitor remains lit for long periods (retail applications, above all), since as payback of the technology used, once the image turns off, the dark shape of the rear monitor remains, so something functional from the technical point of view, but not particularly appreciated by architects and interior designers.

The second is one of the flagships of Ad Notam, being a
technology which, as we have said, is covered by different proprietary patents. The front glass has a bronze/fumè colour and the rear monitor is totally concealed when the image is off; turning on, it appears “by magic” and from here its name. It is a model used primarily in living rooms, in hotel lounges and in rooms of the same hotel chains. The glass presents a special internal almost “porous” workmanship (side in contact with the display), and external workmanship with a shiny mirror, to make the image stand out to the eyes of the viewer. In this case the downside is the residual brightness of the display once it crosses the surface put in front of it; we are speaking of 40% against a good 95% of the Crystal Mirror solution.

The last group is somewhere between the two, with the unique feature that between the surface of the magic mirror and the rear display is coupled another glass. The main application is always the bathroom, but this time against the light grey mirror, when the image is off, there is a bluish surface given by the second glass. This is the solution for large size bathroom glasses, with the display put in a position which is misaligned with respect to the point of vision of the person in front of the mirror, so that the light blue halo left by the switched-off monitor is almost unnoticeable. The limit of this solution is the interposition of the two glasses, which in some way could create a geometric deformation at the edges of the image, problem be avoided by using displays with diagonals up to 22”.

An error which could be committed in good faith when thinking about a “mirror TV” is that the display used is a whatever display, adapted and “glued” behind the screen. To maintain its leadership, Ad Notam has the displays it uses engineered directly to its owns specifications, so that they are all “similar” in I/O and in the operational possibilities, though being divided into diagonals from 13” up to the gigantic 84”, with the 22” models which are LCD displays with rear LED lighting. They are all contained in a white chassis which measures from a minimum of 3.5 to a maximum of 5 cm in thickness and, thanks to the cable housing, it makes everything very tidy and essential. The brightness produced by the display is for the professional market (in some way they have to win the resistance of the front surfaces) with peaks of over 70% higher than a similar sized product on the consumer market. The true gem is the power, all low voltage with separate power supply unit (with cable from 3 to 5 metres) and which allows IP65 certification of the displays. Something which must not be neglected is that being without a cooling system, for special applications (sauna, bathrooms, swimming pools, etc.) they can be sealed directly and made invulnerable to the damp or corrosive atmosphere in which they have to work. These
displays are pure monitors without any tuner or audio system, which are sold as optional when the order is confirmed: in addition to the 3HDMI available it is possible to connect any kind of HD video source which the integrator wishes to display on screen. As each display has an RS232 serial port for the remote control via supervision system, and as each display size has the same serial codes, it is “indifferent” for the integrator to know what type of Ad Notam to integrate into their own AV chain, which benefits the reliability and maintenance
of the systems.